Whitley Chapel appears to have originated as a pre-Reformation chapel on a mediaeval site. The east window stonework is mediaeval and has been incorporated into subsequent buildings. Some interesting and amusing records provide a little of its history.

“There had been in old time a little chapel, by the wayside which leads from the head of the shire of Hexham, where a branch of it turns off to the east to the Steel and Duxfield mills, dedicated to St Helen, commonly called Whitley chapel, which had been entirely ruin’d and rebuilt by subscriptions sometime before the restauration to teach school; and the neighbourhood to meet on occasion”.

“the Quakers from distant parts meeting in the said Chapel hill, and great numbers out of curiosity resorting to them, the said chapel was made fit and appropriate to divine service”.

It was this which probably prompted the church authorities to make the place fit for Anglican services. To this day a wetland area south of the Church is known as Quakers’ Hollow.

“The curate of Slealy at present preaches there every 14 nights, but ye people are so poor, that their contributions raise little above £9 per annum thoa that part of this Shire be above 9 Northern Miles in length & there were above 700 Souls on that side”

Poverty continued notably caused by the decline of a basic industry, the lead trade, as recorded in 1710:

“I must here remark that Whitley Chapel wd not have been fit for divine service in bad weather without the sd repairs, that there be some places in the roofe wch ought to be mended this summer, to put of till they can be rebuilt, to preserve the timber & prevent future damage. This Countrey is very poor at present by reason of the gt decay of the lead trade and want of pay.”

“a subsription again set on foot for Rebuilding this Chapel, and making it commodious for that part of Hexhamshire.”

Abraham Brown, then Master of the Grammar School in Hexham, was appointed the first curate in 1748, and served for 60 years until his death in 1812 aged 92. He is buried together with his wife in the church yard below the east window.

“Mr Brown, the present Schoolmaster of Hexham, does duty there every Sunday, for a very small Salary, raised by Subscription, as an Additional Provision to the 40 Shillgs. P.Ann: left by Mr Ritchell”

In 1752 churchyard ground was established and the churchyard itself was consecrated on 6th July 1764. The estate of Mollersteads was purchased to provide a permanent endowment for the curate Reverend Abraham Brown who was then appointed as the first perpetual minister.

“the congregation in the parish church is comparatively small, which may be accounted for from the seats and the extreme cold. The church is generally more numerously attended in the afternoon than in the morning, the lecture being the attraction”

Extensive alterations and repairs were undertaken in 1836; the church being reroofed with slates instead of stone flag tiles, and pews repaired. Unfortunately the church was then for a long period of time not suitable for services,  partly due to the delays and financial problems of rebuilding but also that no curate was in attendance. Christenings and marriages were performed at Slaley and Hexham.

In 1837 the ecclesiastical connection with York was terminated and the church became subject to the Diocese of Durham. Subsequently it was included in the rural deanery of Hexham within the Archdeaconry of Northumberland and then transferred from Durham Diocese into the Newcastle diocese.

Improvement and repair has continued. At the turn of the 19th Century the gallery at the back was removed and the vestry added. In the 1920s the oak screen, pulpit, litany desk and oak panelling were installed. The first Tilley lamp and boiler were installed in 1938 and the oak lectern provided in 1943. Electricity was installed as late as 1956 when the boiler was decommissioned and electric heating provided.

The churchyard was extended firstly in 1946 and again in the early 21st century. 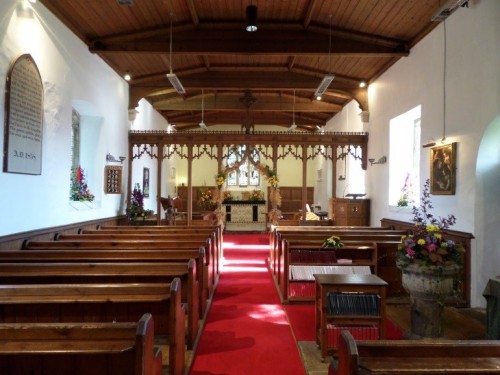